June was a month of exploration and connection with friends and family. We thoroughly explored the Pacific Northwest, down into California and visited four national parks (and multiple national forests)! 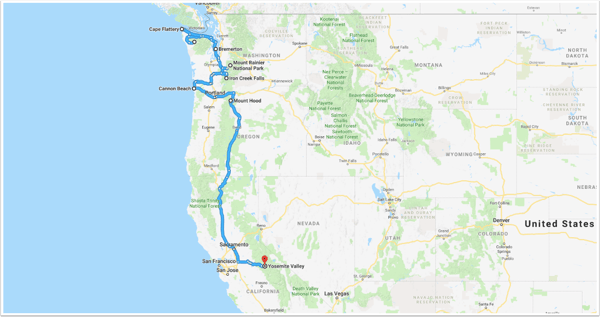 Highlights from this month include climbing down to a magical waterfall in Washington, witnessing the beauty of Mt. Hood, visiting family and friends, and working on some really big projects for Wild We Wander.

Overview: Just west of Seattle, you can access Bremerton easily by ferry. If you ever find yourself on this side, we have a few recommendations!

Where we camped: We tried to stay in Ariele's mom's apartment, but her cat is insane and hated our presence with a passion. We slept covertly in our little home in her parking lot. Funny side story: We came back from a weekend away and saw that the Airstream was off its blocks and the chalks had flown away. We thought someone had messed with us, but it turns out that the pavement was so slippery and we were at such an angle, the pressure was too much and the blocks flew out from under poor Dot. We figured that out because it happened again.

Overview:  The Washington coast is a mystical dream. And not just because Ariele is a Twilight fan. The area was unlike anything we'd experienced. TBH, Forks could be missed, but is a good central location to visit the park and beaches.

Where we camped: Because Ariele's mom was with us, we stayed at a cute bed and breakfast in Forks. 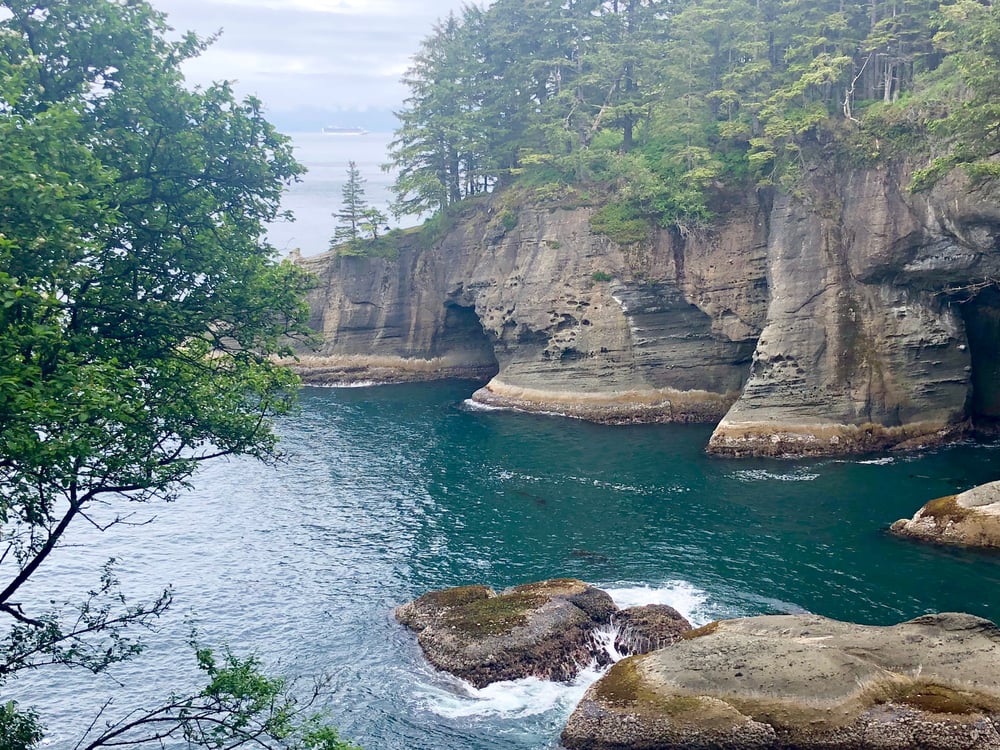 Overview:  Our friend Jesse flew to Seattle to spend an epic week with us in the PNW. Our adventures began in Mt. Rainier where we experienced tons of snow, a very rainy hike, an epic waterfall, and a fantastic mystical campground.

Where we camped: Cougar Rock campground 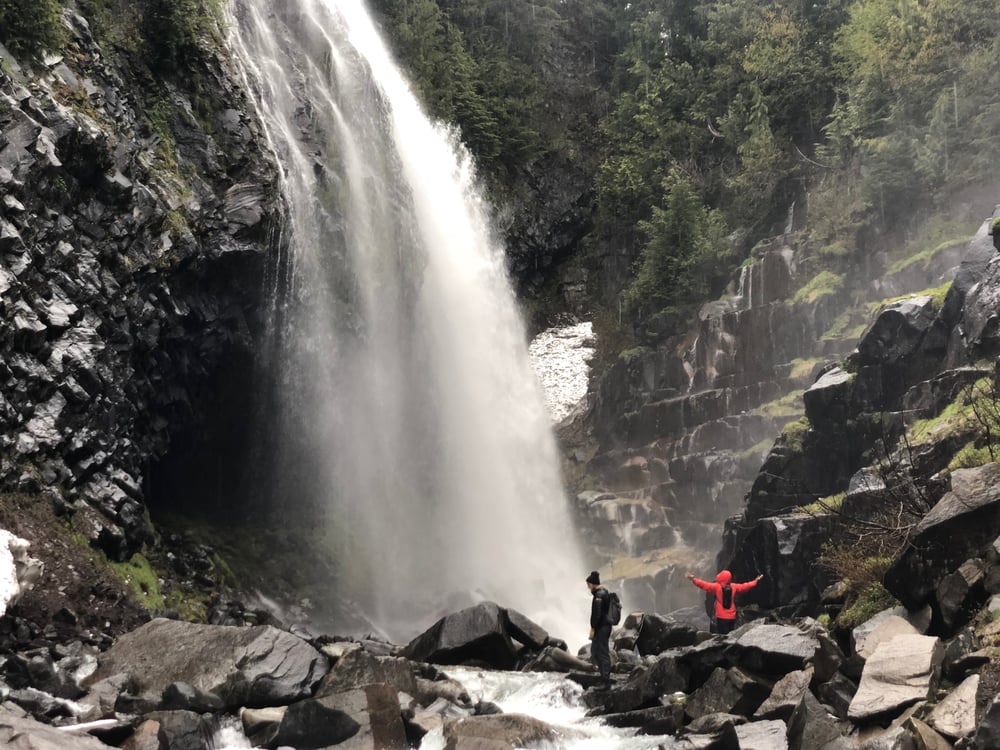 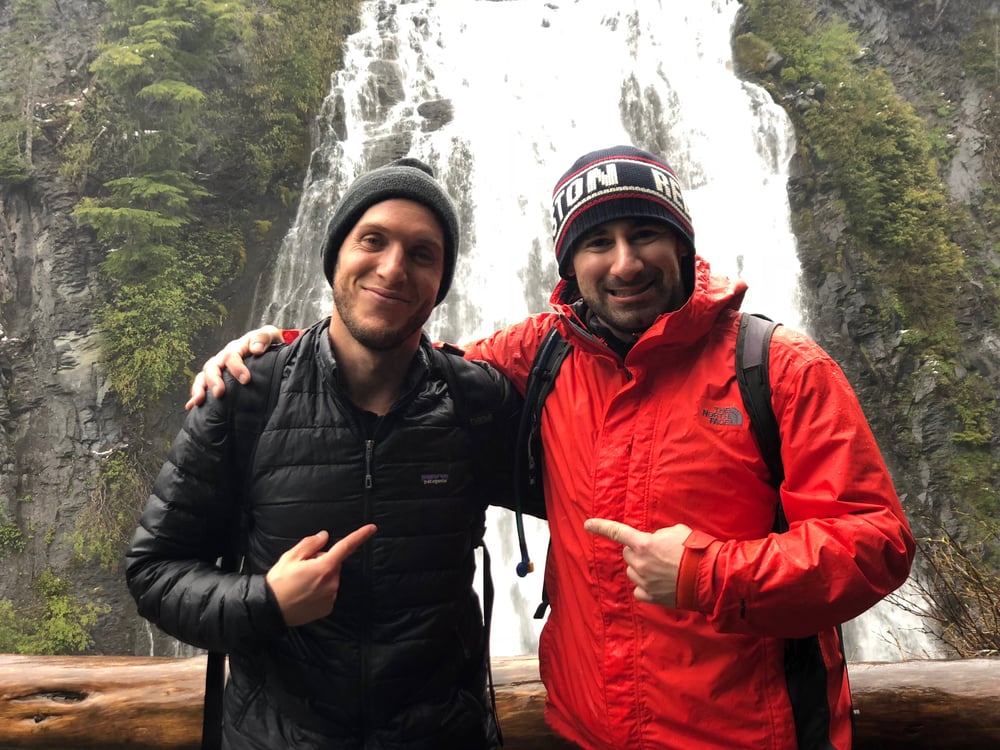 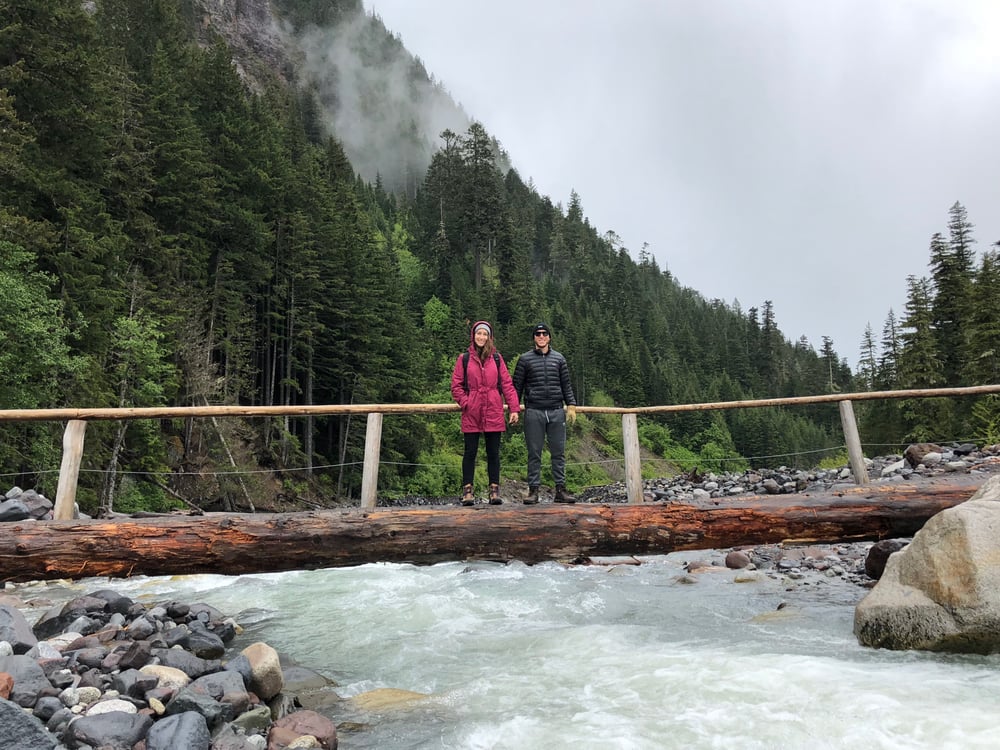 Overview: We were heading to Hood River and came to a closed road. So, instead, we headed to the coast. Keeping with the mystical theme, Oregon's majestic coast did not disappoint. Massive rock formations met the misty shoreline that Justin and Jesse so brazenly ran into, despite the frigid temperatures.

Where we camped: Fort Stevens State Park. A bit crowded, many mosquitoes, but it served our purposes of needing full hookups for the night. 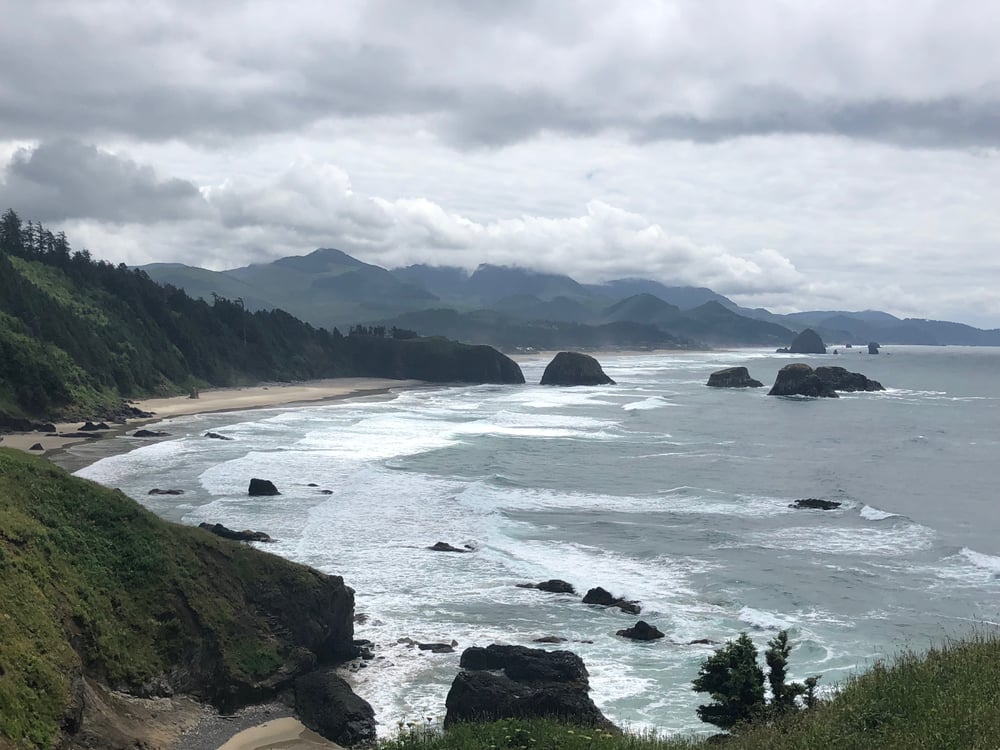 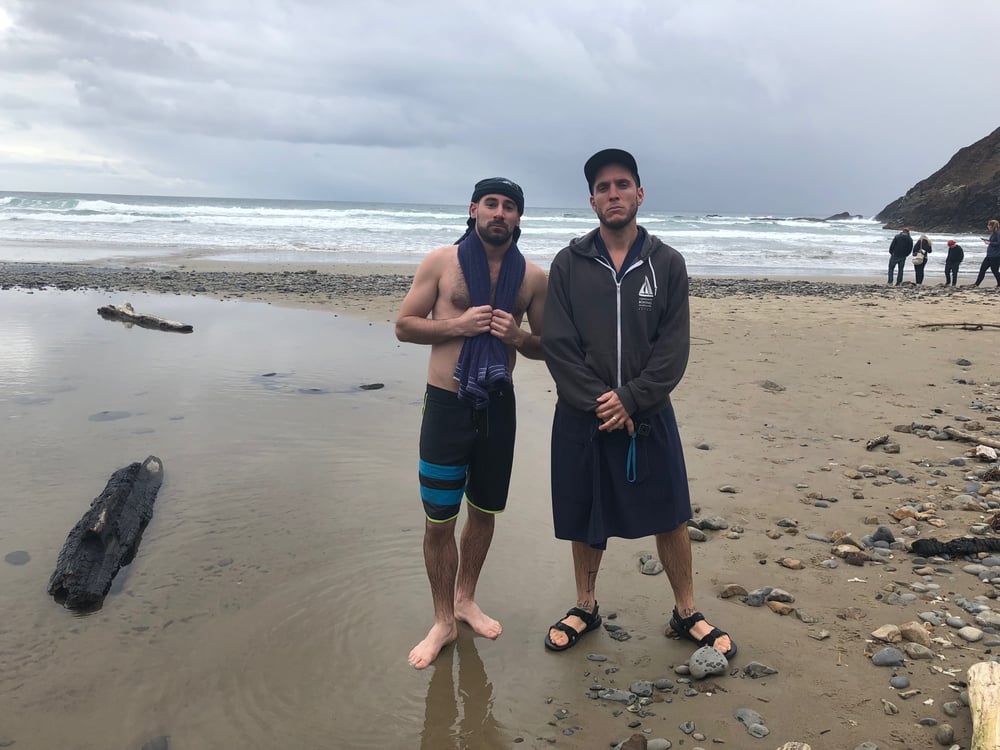 These fools running in when everyone else is wearing wetsuits.

Overview: Our definition of a dream town, Hood River is nestled on the banks of the Columbia River just outside of Mount Hood National Forest. Cute shops, good restaurants, and fun bars and breweries so close to beautiful places to explore make it a place we would most definitely move (if it weren't so far from the east coast).

Where we camped: Trillium Lake campground near Government Camp (another cute town, much smaller).

Remote worker ready? Yes, actually! We had one to two bars of Verizon cell service at the campground, but it was spotty throughout the forest. 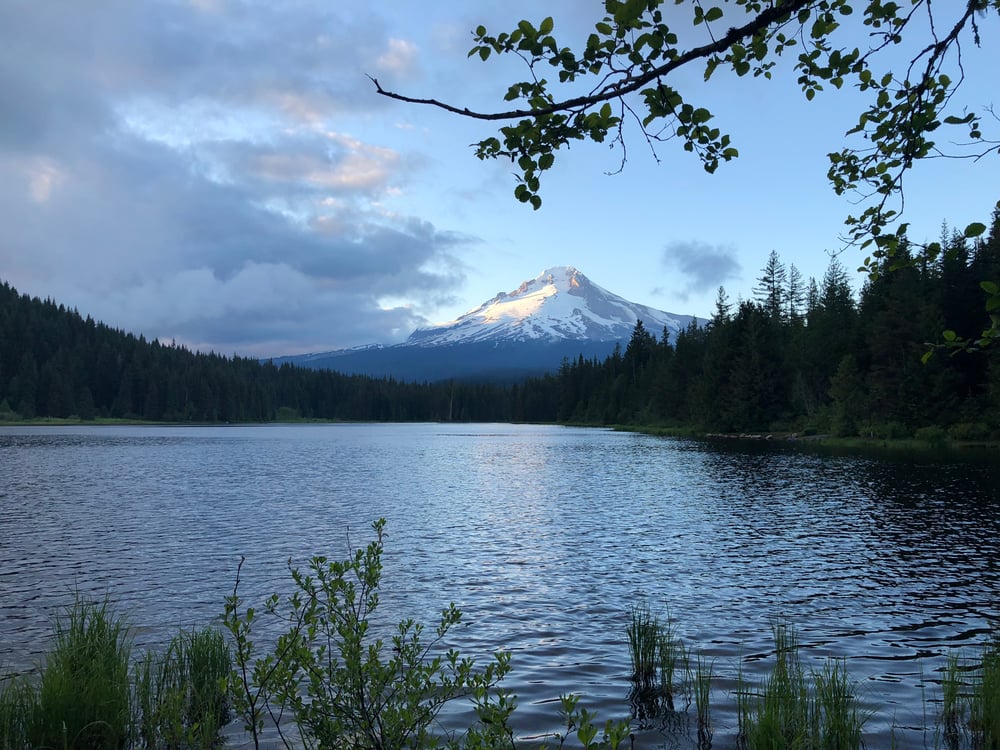 Overview: We spent a few days in Portland for one of Justin's in-person workshops. Ariele's favorite part was the amazing vintage shopping opportunities, so likely we'll be back, even if just for that!

Where we camped: Camping World of Portland and in front of a friend's house on the street. 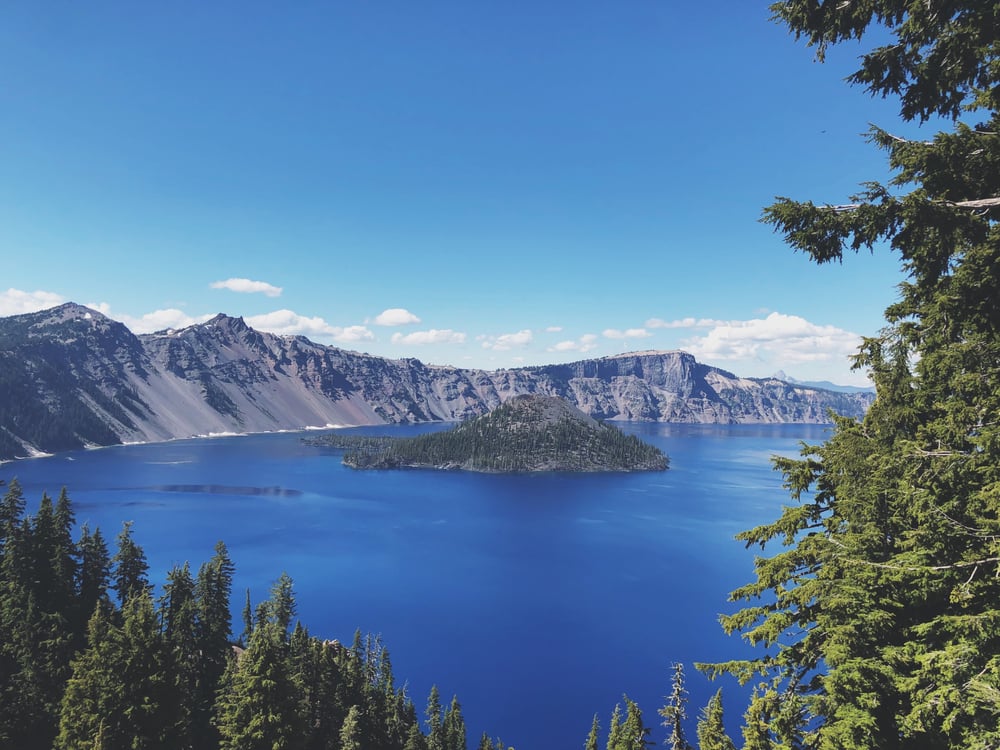 Overview: Seeing the redwood trees is like staring into the night sky and realizing how small you are, yet how connected everything is. Many of the redwoods are thousands of years old and some nearly as wide as a car. 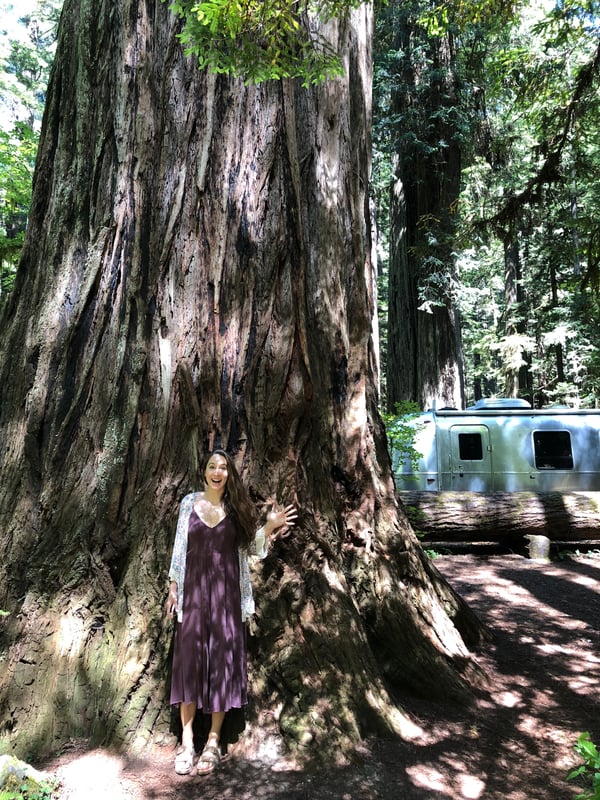 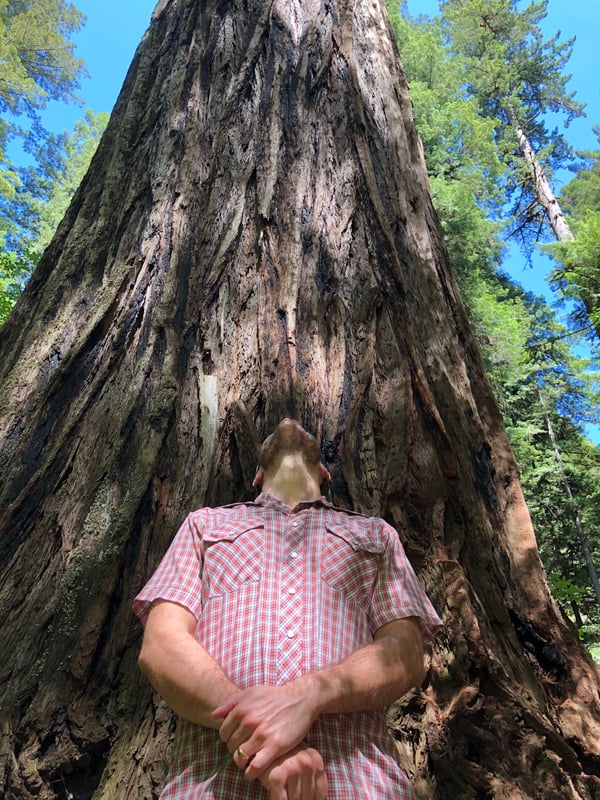 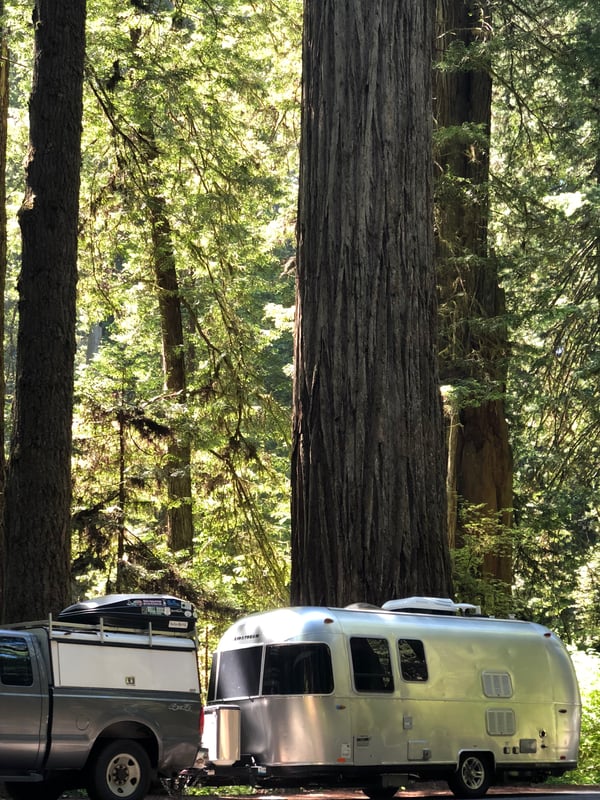 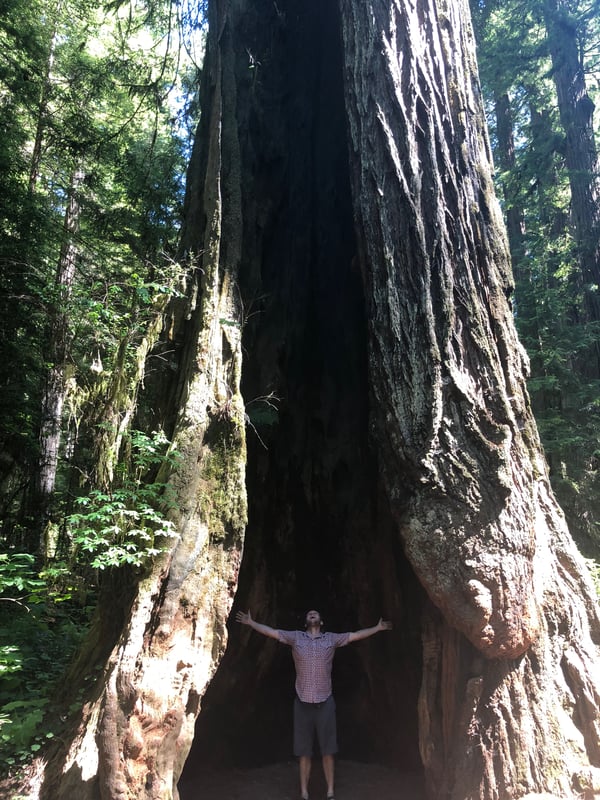 Overview: We stopped here to check out the wine scene on our way to Sacramento. We went on a rare fancy date to a winery and dinner. Dating like this while traveling doesn't happen too often; I think it's because we are on average a 5 on the dirty scale all the time. It was HOT that day, so we were lucky to get into a campground with eletricity to blast our air conditioning.

Where we camped: The Sonoma County Fairgrounds.

Overview: Justin's next workshop was in Sacramento. We wish we had more time to explore this city! From the mid-town area we were in, it seems artsy, fun, yet down to earth. Plus, it was really easy to park the truck and airstream for dinner.

Where we camped: Walmart in Roseville, CA. Not recommended, even though there were a few other campers. Pretty sure somebody was driving in circles around us to wake us up around 1 a.m.

Overview: We arrived pretty unprepared for what was definitely the busiest national park we've visited. We knew not having a campground reservation was risking it, but we are always willing to take a chance. It turns out we arrived the day Yosemite Creek campground opened. We rushed there, down the narrow rough road "not advised for RVs" while nervously missing cars coming up the road. There were plenty of spots left, so we unhitched and drove the 45 minutes or so to the valley to see Half Dome, El Capitan, and Yosemite Falls. We fully intended to hike that day, but spent about an hour and a half just looking for a place to park with hoards of others doing the same thing. We ended up walking six miles that day, but it was around and to the visitor center. Oh, well. Saturday, we spent the day in Tuolumne Meadows, hiking up to Elizabeth Lake. We've never seen water to clear! There is SO much beauty to behold and soak up in Yosemite National Park. We are so happy we spent two nights. But, we could spend weeks more.

Where we camped: Yosemite Creek Campground. We were okay getting our 22' long by 7' wide trailer down the road. There are very few spots to pull over, so when you come upon a car coming the opposite way, it's a game of maneuvering the narrow space. However, we made sure to leave before 6am on Sunday so we did not run into any cars on the way out. The road takes anywhere from 20 to 30 minutes to drive.

Remote worker ready? No. Very limited cell service. The only cell service is in the valley and it's spotty. 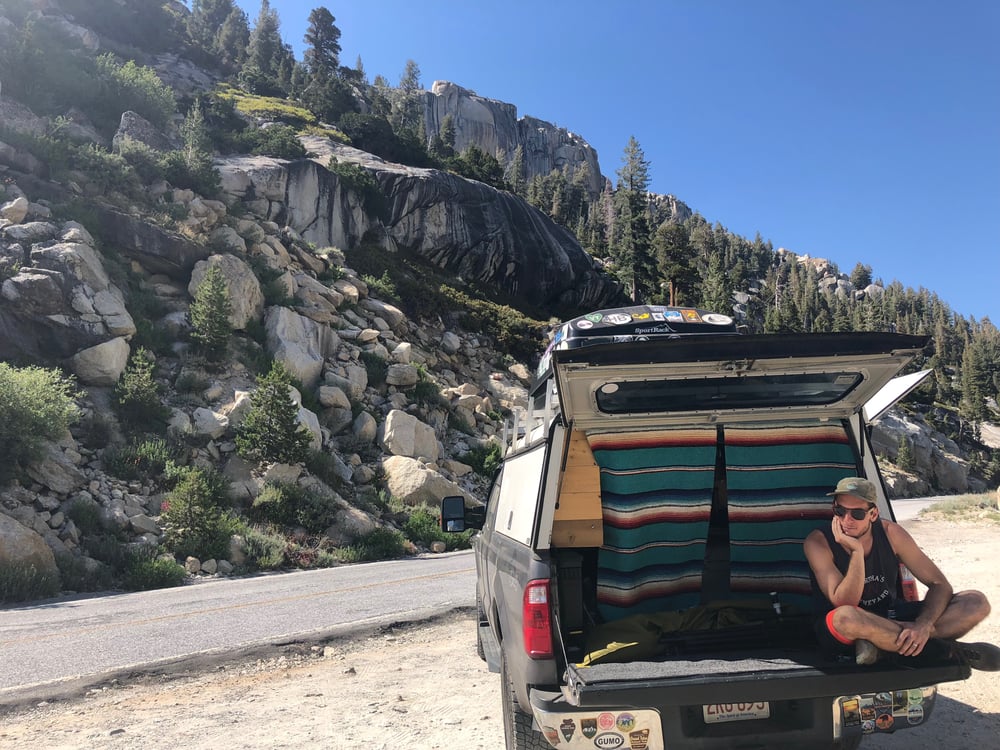 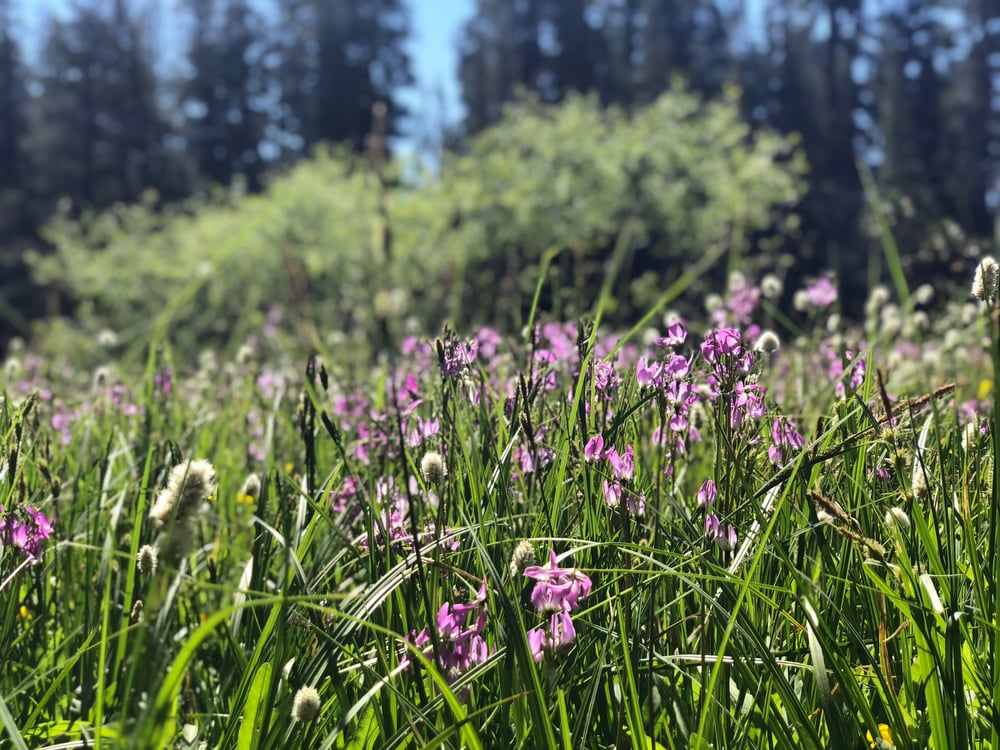 If there is water, he's in. 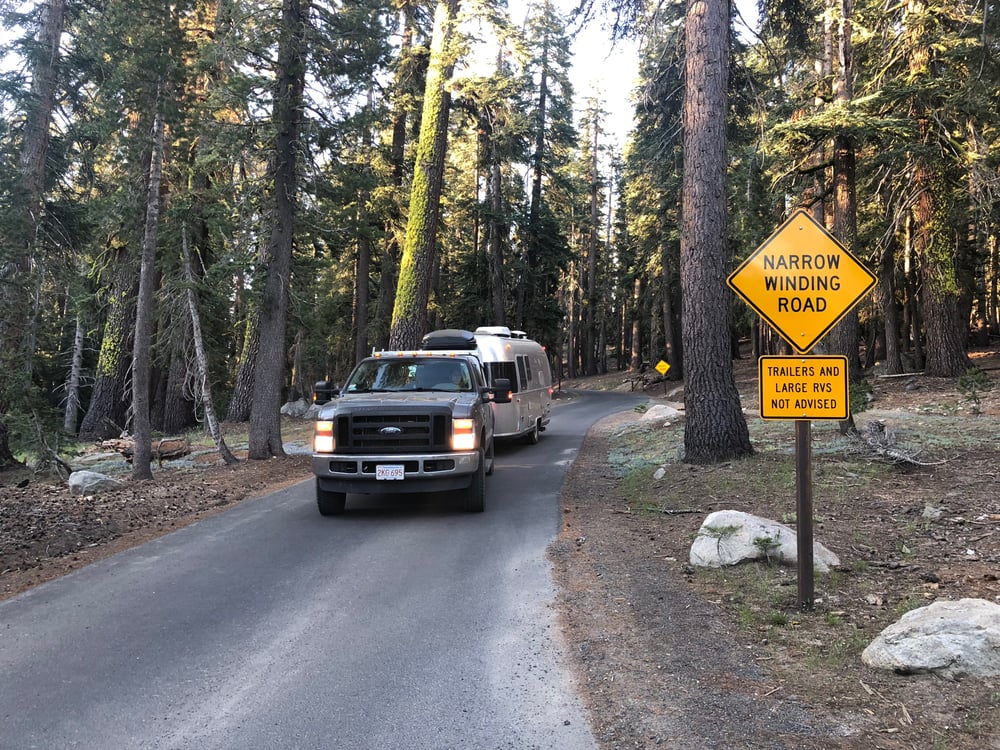 Product OF THE MONTH 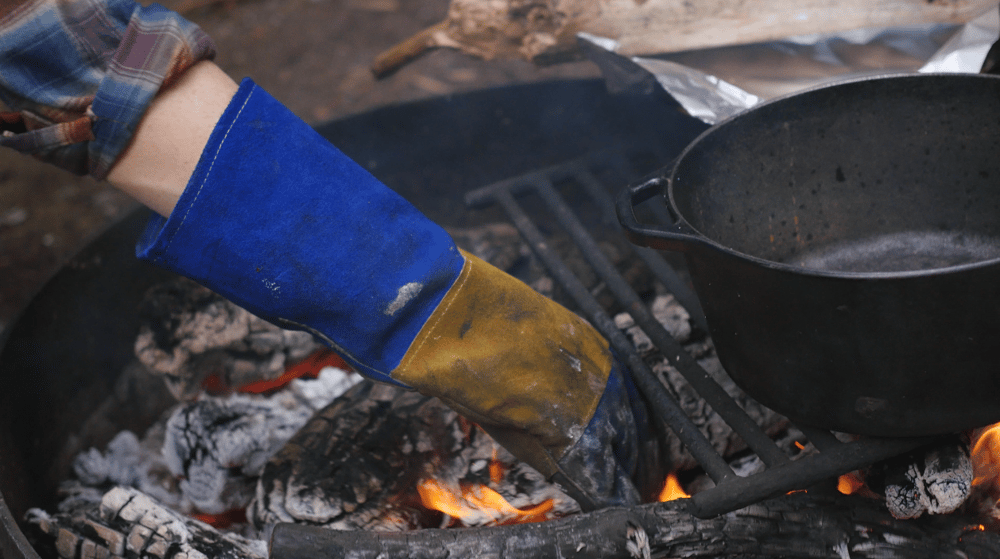 These gloves have been one of the best buys we made for our trip. Justin enjoys adjusting the fire and used to do so with his bare hands, frequently singeing his arm hair. These gloves are heat resistant up to 662 degrees Fahrenheit and go most of the way up your forearms. We use them mainly for maneuvering the logs in the fire, but also for cooking over the campfire and handling cast iron pans.

TINY KITCHEN RECIPE OF THE MONTH

This side dish is quick, easy, and actually makes broccoli crave-able. We cooked it over the campfire, giving it an added smokiness, but it can obviously also be cooked on a stove. 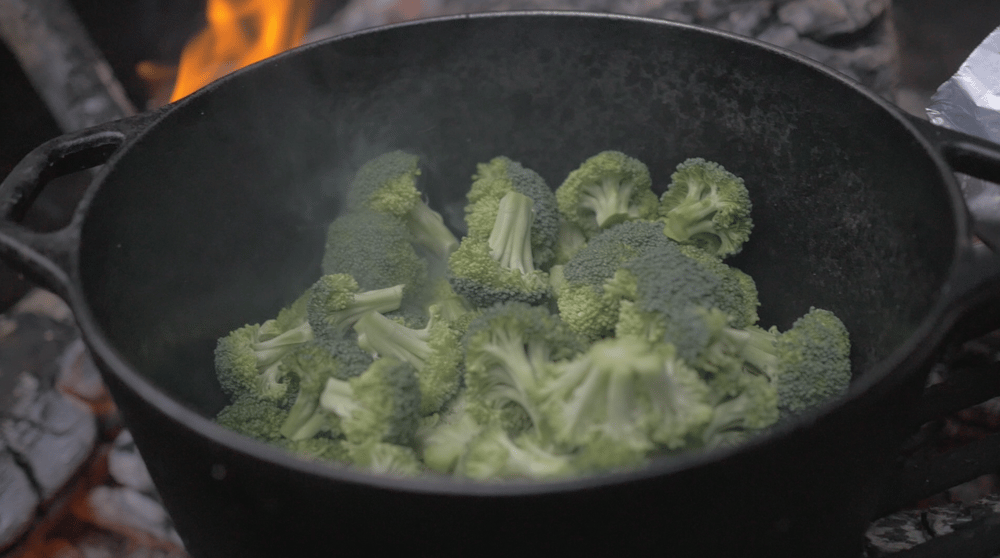 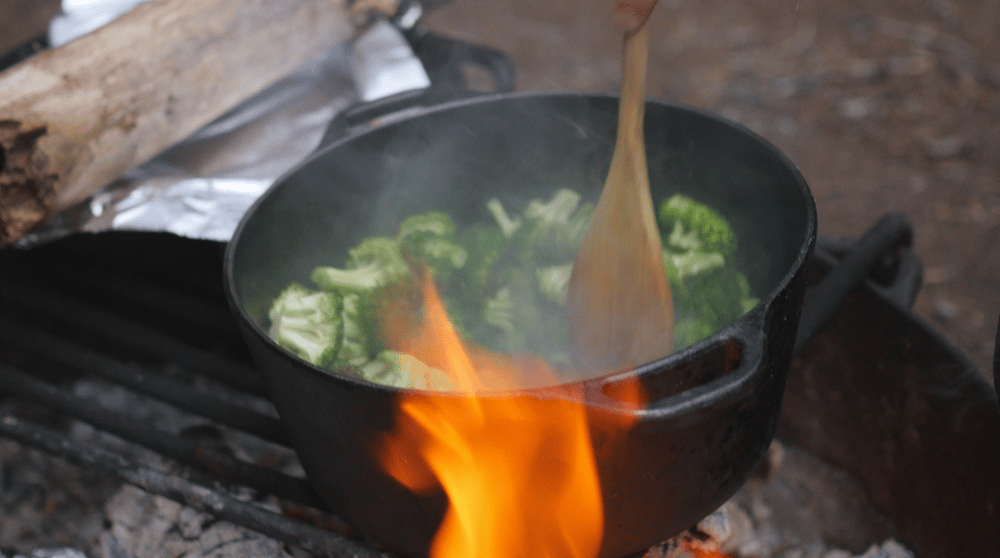 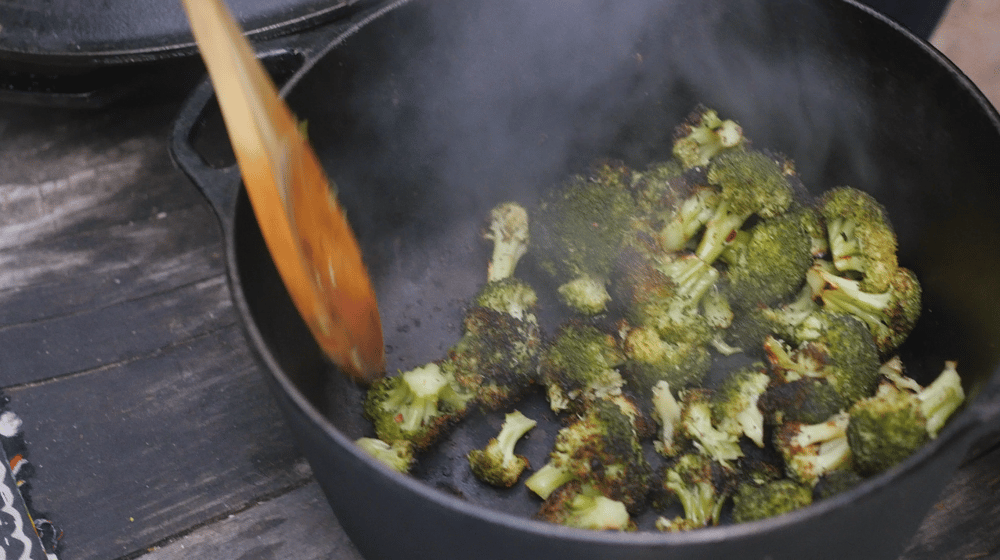 Use a large iron skillet or iron dutch oven. We used our dutch oven because we were using our skillet for salmon. Over medium-high heat (I feel our campfires are generally this or even hotter), add the olive oil to the heated pan. Once the olive oil has warmed up, throw in your broccoli, sprinkle with red pepper flakes (use sparingly) and cover with a lid. Stir the broccoli occasionally so you get a nice even black char. After about ten or so minutes, remove from the fire and serve immediately. Add a few dashes of coconut aminos for a semi-sweet and salty flavor. 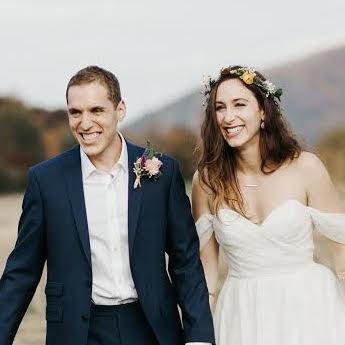 END_OF_DOCUMENT_TOKEN_TO_BE_REPLACED

Keep up with us and our travels!